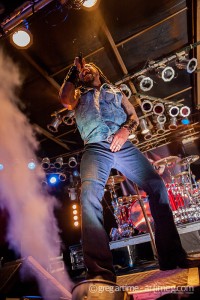 Now that is how you put together a hard rock show. Sevendust capped off an amazing, non-stop show with newly reunited Coal Chamber, Lacuna Coil and Candlelight Red at Pop’s in Sauget, IL.

The crowd wasted no time showing up for this one. Hundreds waited in line for the doors to open and by the time the first band, Candlelight Red, took the stage Pop’s was packed from the floor up to the balcony. 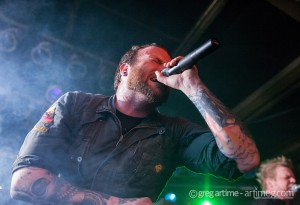 Candlelight Red got the night started. Although the four piece band from Pennsylvania had to work with a very limited amount of room to work with on stage that did not stop them from putting on an energetic show. Despite some technical difficulties, the lead singer, Ryan Hoke, gave a great performance. Ryan has a great vocal range that allows him to go from raw screams to more melodic vocals. He asked the crowd, “Have we made any new fans?” the fans responded with screams and hands in the air. They played a quick 30-minute set, so make sure to get there early and be sure to catch their set. 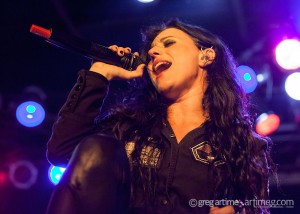 Italian rock band, Lacuna Coil, continued the intensity with their set. Having been a band for over 17 years Lacuna Coil is no stranger to the metal/hard rock scene. The combination of Cristina Scabbia’s beautifully melodic voice and Andrea Ferro’s more traditional metal voice, Lacuna Coil provides a unique experience. Andrea’s facial expressions give a great amount of intensity to their performance. That combined with the powerful vocals and stage presence of Cristina made for a fantastic show. 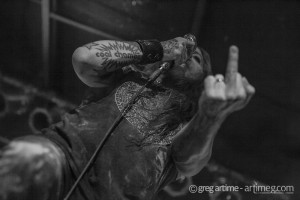 After an 8-year hiatus, Coal Chamber announced back in 2011 that they were reuniting with their original band members, except for Chela Rhea Harper, who took over on bass and is a great addition to the group. She flung her hair every which way imaginable all night long. Drummer, Mike Cox was the first band member out to the stage and after taking his place behind his drums he gave the crowd a smile and a wave. When the rest of the band arrived, they wasted no time jumping into their set, which started with “Loco.” To pick up his distinctive vocals, B. Dez Fafara was using an old square/announcer style microphone. The crowd immediately got pumped up and moving when they began to play. There was an almost constant mosh pit in the center of the floor with crowd surfers keeping security busy. They played other hits such as “Big Truck”, “Fiend”, “Not Living” and ended the night with “Sway (The Roof Is On Fire)”. Fafara told the crowd that they were crushing it and he knew this show would be fucking cool, which got the crowd even more excited. 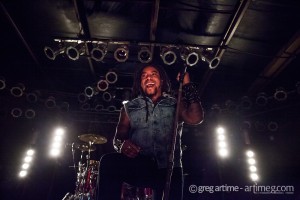 Touring in support of their new cd, “Black Out The Sun”, headliners, Sevendust, were up next and they did not disappoint. They played an amazing 12 song set featuring songs from their debut, self-titled album to their new latest album, “Black Out The Sun”. Their latest single, “Decay” was first up the crowd was ready with a constant stream of crowd surfers and moshing.

There is nothing like a Sevendust show Lajon Witherspoon, John Connolly, Clint Lowery, Vince Hornsby, Morgan Rose have been playing together since 1994 and it shows. The chemistry and energy that these guys have cannot be match.

Lajon has one of the most recognizable and unique voices in rock. He knows how to put on an amazing show and has a great time doing so. He is always smiling between songs and you can tell he sincerely enjoys what he does.

Morgan is an absolute mad man behind his drum kit. I have no idea how he can provide backing vocals, while still going crazy on the drums. I was almost out of breath just trying to watch him.

I had a blast watching bassist, Vince Hornsby perform. He constantly has a smile on his face and has great expressions on his face. I lost track of how many drum sticks he handed out, while never missing a beat on his bass.

Both guitarist, Clint Lowery and John Conolly provide the hard hitting riffs and raw vocals that Sevendust is known for. Guitarist/vocals, Clint Lowery, recently took time off from the band in order to be with his wife, who was pregnant with their second child. Since Clint currently resides in the St. Louis area, he was able to join his band mates for the St. Louis show. Lajon Witherspoon congratulated Clint and his wife, Tara, on their new baby girl and the crowd gave a big cheer to Clint as well. While Clint is away, Troy McLawhorn is filling in. Troy did make an appearance and played guitar on “Black”. Lajon mentioned that he loves being in beautiful St. Louis and still wanted to get to local restaurant, Sweetie Pies. He also gave a shout out to some of the local guys in Evans Blue, who were at the show, including their lead singer and native St. Louisian, Dan Chandler.

They ended the show with an encore by playing “Splinter” and “Face to Face”.

This will most likely be the final cd released by Sevendust and you never know if this will be the final time they play your city, so if you have the opportunity to see them, go!